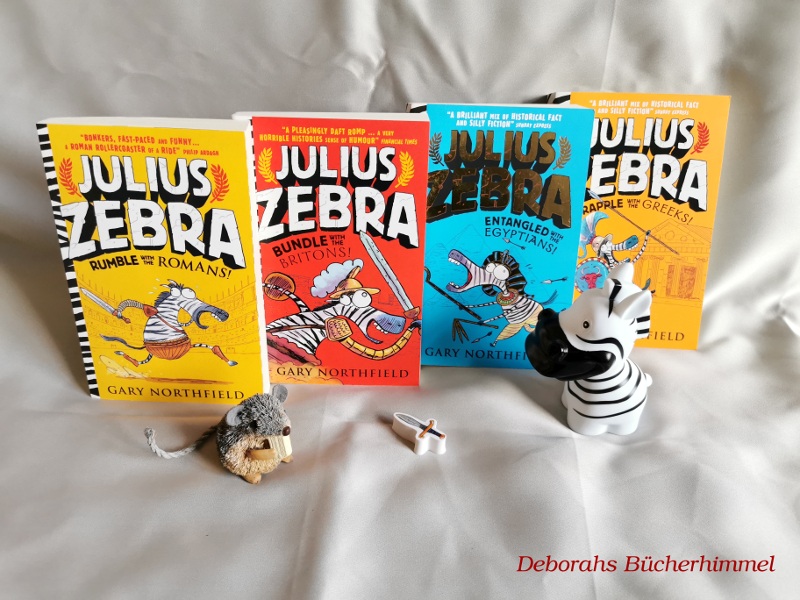 Hello again, it‘s time for another novel review in English here on Deborahs Bücherhimmel. Gary Northfield’s Julius Zebra – Rumble with the Romans is the beginning of the Julius Zebra saga.

How it all began … Join Julius and his friends on their not-so-voluntary-trip from a smelly watering hole deep in the heart of the Serengeti to the ferocious clamour of the Colosseum where they gear up to be … gladiators! If they want to win back their freedom they have to win the love of the Roman crowd, but do they have a chance to win against the meanest and toughest rivals?

Julius Zebra – Rumble with the Romans is the 1st part of Gary Northfield‘s youth novel series about the crazy zebra Julius and his friends. I love Gary‘s special style and the crazy mixture of historical facts and silly fiction. See also my review to Julius Zebra – Entangled with the Egyptians (3rd book of the series).

The story, how Julius and his friends come to Rome and what happens until their big fight for freedom is indeed bonkers and fast-paced (as promised on the book cover).

While joining Julius and his friends struggles and having fun accompaning the gang Gary foists us some historical details of the ancient Roman Empire. At the end of the book you‘ll find a glossary and an overview of the Roman numerals. These guys had a special way to count 🙂

My résumé to Julius Zebra „Rumble with the Romans“ by Gary Northfield:

For me this story was a wild rollercoaster ride through the ancient Rome with twists and turns. It was great fun reading it. I‘ve read the English original and I needed to look up only a few words.

I recommend to read the original English version if you have good basics of the English language.

Thanks to Sara from Walker Books for this review copy of „JayZee“ from Gary Northfield.

„Julius Zebra“ is published by Walker Books UK. More information around this crazy funny series you can find here.