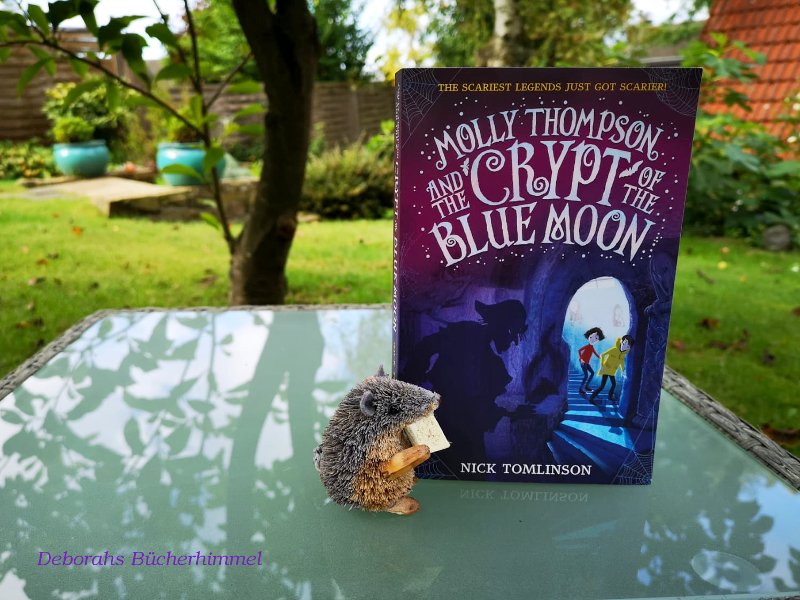 Hi, welcome back to Howlfair to Nick Tomlinsons‘s new mid-grade creepy and spooky novel Molly Thompson and the Crypt of the Blue Moon, the second part of the „Molly Thompson“ series. Following behind my review you‘ll find also an Interview with the author what I shortly made before publishing day.

Molly Thompson is back with a new adventure. You’ve probably heard of Molly. No? Ah, never mind. It’s time to change that and get to know her.

After saving her hometown Howlfair from the ghoul attack in „The Ghouls of Howlfair“ young historian Molly Thompson is taking a break from solving mysteries in the world’s scariest town.

But then two journalists appears to write a feature on Howlfair and they have chosen Molly to be their tour guide. For her it‘s a possibility to save her family’s struggling guesthouse and to push Howlfair’s weakening tourist industry.

But these creepy journalists are a bit too interested in the local phantom known as the Silentman and they want to find and open the hidden crypt – and Molly is their key.

Molly Thompson is a clumsy but serious young historian searching for the truth behind her town’s scary legends. She’s trying to help save her mother’s struggling guest house by acting as a tour guide for two journalists who have come to Howlfair to write a feature on the town – a feature that could help Howlfair’s flagging tourist industry and bring visitors.

Lowry Evans is Molly’s scatty, hyperactive best friend. Whenever Molly finds herself banned from investigating mysteries, Lowry finds a way to help her out. She is there when Molly needs her. By the way… the way Lowry bursts upon the story is Hollywood-esque. I laughed tears …

Gabriel is Molly’s cat (and guardian), a scrawny thing with very few of his nine lives left. He seems to have mysterious powers, and he DEFINITELY doesn’t like the Corches siblings … but why? Read to find out!

Carl Grobman is a sullen loner who lives in Howlfair orphanage. He works part-time as a gravedigger and has a few creepy secrets… After the events of THE GHOULS OF HOWLFAIR, he and Molly can‘t stand each other… But do they need each other more than they realise?

Felicity Quick is a fierce but brave school bully with a soft side and excellent lock-breaking skills. Previously Molly’s enemy, she‘s now teamed up with Molly and Lowry in the hunt for the secret crypt, unaware of the dangers awaiting her.

Orson and Lucinda Corches, the journalists, want Molly to help them locate the secret crypt of an executed town crier whose ghost became known locally as the Silentman. They claim to be continuing their late parents’ search for a priceless – supposedly magical – handbell that they believe was buried with the town crier. But could the Crypt contain more than just treasure?

My resume to the new Molly Thompson book:

It was amazing coming back to Howlfair and meet Molly and friends again. As expected I found myself right in the middle of some mysterious creatures, thrilling encounters and a dark prophecy that becomes reality.

Come on and guide Molly through the spooky tombs and fight flying skeletons with her. But stay away from the phantom whose touch spells madness. Do you dare? Come to Howlfair and be part of the story.

Nick Tomlinson surprised me with a different end than I had expected. This novel earns a full five star reading recommendation from my side. I have to raise my hat. Thanks Nick for this amazing story.

Time to meet the author of the „Molly Thompson“ series:

Q: Where do you live?

A: In rural Herefordshire, England, near the Welsh Border and the world-famous ‘book town’ of Hay on Wye.

Q: How long have you been writing stories and novels?

A: Since I was 5! Mostly rubbish, admittedly.

Q: Who is the inspiration behind the character of Molly Thompson?

The pupils I taught at a girls‘ school in Birmingham. I mentored a group of bookworms who called themselves ‘weirdos’. I wanted to write a book about someone like them, rather than about some brave feisty adventurer type. She and Lowry are so much fun to write about!

Q: How much of your personality is in Molly?

A: Oh, loads – she’s awkward and unreliable and a bit annoying (as some reviewers have noted!), just like me. And we both have zany curls. But Molly’s also someone I’d like to be – she’s never gives up, she’s a brilliant problem-solver, and she tries very hard to be a better person.

Q: What books have you published so far?

A: My adult novel ‘Saint Valentine’ was published few years ago by Transworld – it was a comedy about a thirteen-year-old romantic who wants to become a poet. Originally it was supposed to be aimed at teens – Dame Jacqueline Wilson wrote a glowing commendation! – but there was a change of plan, alas. My mid-grade ‘Molly Thompson’ novels, ‘The Ghouls of Howlfair’ and ‘Molly Thompson and the Crypt of the Blue Moon’, are published by Walker Books.

Q: And last but not least … What inspired you to write this novel?

A: There’s arare astronomical event in October known as a ‘blue moon’, and it’s taking place on… ta-daaaaa!… Halloween! Molly’s first adventure in the world’s scariest town took place during a blue moon, so I knew I had to bring the theme back again. I pictured an ancient crypt with blue windows, flooded with moonlight, containing a ghastly secret that Molly is being drawn towards. After ‘The Ghouls of Howlfair’, she was really hoping for a break, but I had other plans in store for Molly and her friends

Thanks to Nick for this spontaneous interview.

I mark the following links (and also those mentioned above) as advertising in accordance with § 2 No. 5 TMG:

Thanks to Sara from Walker Books for this review copy of Molly Thompson and the Crypt of the Blue Moon from Nick Tomlinson.

Molly Thompson and the Crypt of the Blue Moon is published by Walker Books UK. More information around this amazing creepy and spooky Halloween story you can find here: Walker Books UK

To read my review to the first part „The Ghouls of Howlfair“ please click on the title.